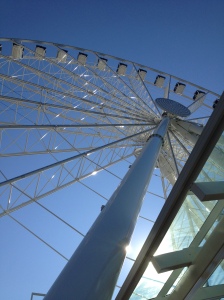 As a little Friday afternoon workplace adventure, most of us aro.com employees took a spin on the Seattle Great Wheel, down on the waterfront. This time of year, there are few tourists below retirement age or children, so apart from us there was a preponderance of the cruise ship set. As we approached there were three elderly ladies progressing slowly up the old wooden pier with walkers, and the queue contained a fair number of brightly colored visors, unabashed fanny packs, and false teeth.

The problem with ferris wheels in general is that there’s a 3:1 ratio for waiting: riding. Probably more than that if the line hadn’t been relatively short. It was a beautiful, warm October day, so 45 minutes of standing on a pier was not at all unpleasant.

As a kid, my Grandpa Frank would ride the Ferris Wheel with me every year at the county fair. Besides the obligatory elephant ear, this was the event I most looked forward to. Once we got in line, the anticipation was almost unbearable, but I learned to be patient, and not to be too disappointed when we ended up at the front of the line when the wheel was full. We’d be the first to get on the next go round.

Those old ferris wheels had already been around the block a few times by the late 1970s. The metal seats were dented and dinged, and there were rusty spots where the paint had flaked off. On the frame of the thing, goopy blackened lubricant was visible on all of the moving parts, just like the stuff Grandpa Frank used on his excavation equipment.

The seats on the old wheels were uncomfortable and felt unsafe. They swung wildly as soon as we sat down, and there didn’t seem to be much holding them onto the wheel. The bar across our laps was wobbly, and didn’t seem sturdy enough to prevent us tumbling to our deaths. Underneath the frenetic carnival music, I could hear the groans and squeaks of the wheel as it moved.

At the top of the old wheels, in the open air, it was like sitting atop a mountain of neon, with the whole fair far below. We would wave to grandma, a solitary figure over near the carousel with a camera pointed upward. Grandpa rocked the seat just enough to scare me. It really felt like we could go upside down and fall out. When the ride finally started it was a wonderful thrill after all of the slow-moving anticipation. The world rushed past in a blur of neon lights, and with every descent, my stomach was in my throat.

The Great Wheel was nothing like that. The enclosed, air-conditioned gondolas would rock ever so slightly, but not in a way that felt dangerous. The wheel moved slowly and smoothly, and clockwise (forward from the point of entry). On the old wheels, you moved backward and up, then forward and down… because the biggest thrill you get on a ferris wheel is the sensation that you’re falling with nothing underneath you. Descending while facing the wheel completely negates that thrill.

Not that there would have been any hope of a thrill anyway… the Great Wheel moves slowly and gently, offering beautiful views. If I hadn’t lived in Seattle for 22 years, I may well have been gobsmacked by the views. And I certainly enjoyed them… we even got to see a seal playing in the Elliott Bay. But I’ve seen these gorgeous Seattle sights from most other angles already. Seeing them from inside a glass box was ok, but not quite Great.