In recent years, Coeur d’Alene, Idaho — where I lived the first eighteen years of my life — has been earning high praise as a beautiful gem in the mountains with a plethora of activities for the vacationer. This article holds it up as the #1 mountain town in the United States. I can’t disagree. Coeur d’Alene is a great place to visit, but I’m still not sure I’d want to live there.

I love my hometown. Mostly. When I was a kid, I didn’t think about whether I liked where I lived, or if I might like somewhere else better. It was what I knew, and I didn’t have any complaints apart from the fact that it seemed unreasonably difficult to spell Coeur d’Alene.

As a teen, I started to think I belonged somewhere else, and I was probably right. I was listening to The Cure and getting interested in exisitentialism and dadaism and art that went beyond the Northwest landscape. The town was too small. The minds were too small. And we had to special-order all of our music. I left in 1990.

As I get older I start to feel more nostalgic. I miss the heavy arid heat of summer that we don’t get in Seattle, even when it’s hot. I miss the thunderstorms, and the outrageous sunsets over the lake. And I especially miss the lake. I was in that lake constantly during my childhood summers, and now every time I submerge myself in that clear, cold water it’s almost a spiritual thing. Rebirth. Returning to the source. 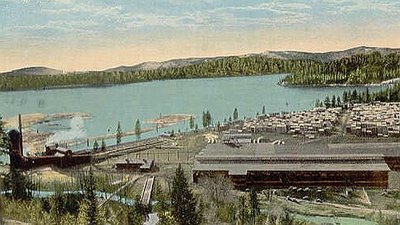 Coeur d’Alene is a beautiful place, with forested peaks cradling the glacial lake — though every year there are fewer trees and more new homes, status-symbol eyesores and time-shares. The tourism industry has taken over and transformed the town. No more mills spewing plumes of steam on the horizon and sounding whistles to mark the passing hours. Early shift. Lunch break. Swing shift.

Everyone worked at the mill back in the 1970s. Both of my parents worked there at one time or another. I have no idea what the term “pulling green chain” means, but I heard it often, and it didn’t sound like much fun. My general impression is that all of the local kids who worked summers at the mill after high school are lucky to still have a few limbs.

My spot on Sanders beach was officially on mill property, way down at the end past the log boom. The mill watched over the beach, like a benevolent machine, calmly steaming. The sound of saws was a distant and continuous buzz-buzz.

My senior year of high school, our local land baron bought the mill and burned it to the ground, to put in a golf course. When I came back to visit in 1992, the juxtaposition of the familiar and the unfamiliar was almost too much to take. I have never been so horrified by the sight of a golf course.

As far as I’m concerned, Coeur d’Alene’s growth as a tourist destination is making the town more hideous by the year. One of the problems is the local land baron mentioned above (Duane Hagadone) and his architects who apparently hate beauty. The buildings are monstrosities. When I was a kid we had the North Shore resort, which was sixties-modern and swanky. Shag carpet in different jewel tones on each floor. The Cloud 9 restaurant and bar with a 360-degree view. Now the focal point of the whole town is the cheap-looking 80s castle-thingy that was built on the foundation of the North Shore.

Hagadone’s retail development of the main street — as well as the expansion of malls and box stores to the North — put the local shops like The Bookseller and Total Eclipse records out of business. Though I suppose the global economy would have done so regardless. Hagadone tore down the classic Wilma theater, where I had seen the Rocky Horror Picture Show for the first time. To this day, there is nothing but an infuriating empty grassy space and a bad mural where the Wilma once stood.

Downtown is now fairly useless to anyone who isn’t a tourist. The quaint shops trade in overpriced Northwest kitsch, mediocre local art (along with some surprisingly good local art), and gaudy jewelry. The downtown restaurants are pretty much terrible and overpriced (look elsewhere for good food). Happily, the Iron Horse restaurant and bar is still totally un-classy and attracts “bikers” (read: retired, overweight people on  expensive Harleys), and reminds me that I’m in Idaho and not Northern California.

The main problem with Coeur d’Alene (and most of Idaho) is the prevalence of small-mided conservatism. People lined up at 6am to wait for a chance to meet Sarah Palin for a book signing a few years ago. She spent a few of her college years in Coeur d’Alene. If anything, the town has grown more conservative since my childhood. The working class has been driven elsewhere, or reduced to jobs at call centers and fast food restaurants. The anti-gay rhetoric abounds as Idaho struggles with gay rights issues and bullying. And yes, it’s all white people.

The neo-Nazis — who had their compound outside of town — were driven out a decade or so ago when a Native American woman sued them after their guards beat her and her son when they stopped to ask for directions. It was the whiteness of North Idaho that attracted the white supremacists, and I’m sure there are still some lurking. Overall, there’s not much overt racism today. It was the Swedish settlers 200 years ago who refused to hire non-white labor, creating a pocket of whiteness in the melting pot.

Regardless, there’s an undercurrent of intolerance familiar to most small towns. It’s not scary — like my dad’s hometown of St. Maries (“Come for vacations, go home on probation!”) — but my LGBT friends stick to the places they know they are welcome, and otherwise don’t draw attention to themselves. You never know when you might accidentally tap into someone’s hate.

Someday, I might want to live in North Idaho again. I long for the landscape sometimes, even amongst all of Seattle’s spectacular views. Now I can tap into culture and buy books and music anywhere I can get on the internet, so access is no longer an issue. But I still have a love/hate relationship with the town. I always like to visit, though.